Why You Need a Business Structure

Sometimes I feel like I’m beating a dead horse about the need to have a business structure when you hold real estate. I figure I’ve been talking about it practically non stop for 20 years now. Surely everyone has heard it by now?

Then I heard someone saying that “someone” told them they only needed insurance and probably not even that for their property. I ended up going round and round on the issue. There are times I feel like just giving up on it. I want to say, “Fine! Don’t have a business structure. Maybe you’ll be lucky.” But it always bugs me. Well, I heard a story that made me realize how important it is to get this information out…even if people don’t always want to hear it. 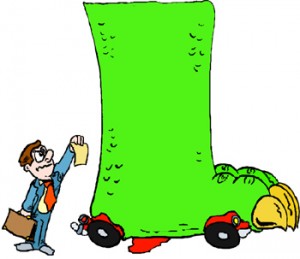 Are You Protected if the Unexpected Happens?

This came from a client of mine in Florida and it’s the true story of what happened to him that made him vow to ALWAYS use land trusts and limited partnerships (LLCs would work as well) to hold property.

Early on in his investing career, he and his wife owned an apartment building. There was a news bulletin out! A suspected murderer, presumably armed, had escaped and was in the neighborhood of his apartment. One of his tenants said he’d seen the man and they called the police. Another tenant came forward and told the police that he’d ridden the elevator with the man and he pointed to the apartment that he saw him go into.

The police (along with my client) went to the door. They heard a baby crying inside. They knocked. No answer. They knocked again. No answer. That’s when the decision was tough. They could break down the door, but it was a possible hostage situation with an armed suspected murderer and a baby.

That’s when my client said, “I have a key!” And he gave the key to the police. They used the key to go inside.

It turns out it wasn’t their suspect. Not only that, the tenant (a single mom) was furious. She said she’d been harassed by my client by unlawfully giving the key to her apartment to the police and so she sued him for one million dollars.

She got a pain of a lawyer and my client called his insurance company. They brought in their lawyers as well…focused on how it wasn’t their fault. At one point he spent day after day with 3 lawyers at $300 per hour (that he paid for). In the event, the insurance company settled with the tenant and it all went away.

Why did he fight so hard? He had EVERYTHING he owned at risk because he had no business structure in place.

Love from our customers

In 2017, I became an Enrolled Agent(EA), considered one of America's Tax Experts. However, the one thing I learned becoming an EA is how much we don't know and being one of America's Tax Experts you have to constantly keep learning. I search everywhere for the best opportunities to learn more about business and real estate taxation. I wanted the most current and updated information so I can provide the best level of service to my clients. When I learned that Diane Kennedy had a twice a month coaching program that gives you the most updated information about the niche I service. This was a no-brainer! Twice a month I get access to one of America's top author and expert on business and real estate tax topics. If you are on the fence about signing up for coaching. You need to hop off and join!

I love, love, love your twice-monthly coaching program! You pack more info into that half hour than day-long seminars I’ve attended! I always download the home study course and the recording so I can go over it a few more times before your next coaching session– and I find that I still pick up some additional strategies then. I know how much work and research you put into each coaching session and home study course, and it does not go unnoticed. Thank you!

Thank you for your Saturday consult, Diane. It certainly cleared the muddiness in my decision re Sub S election. I learned more from you in 30 minutes than I learned from my past year with the big accounting firm that I use! I get vague answers to specific questions from them but I really felt your answers were focused, actionable, and specific. Thank you again.

Congratulations on publishing an important and wonderful book.

Wow, EXCELLENT coaching session! You packed a lot of "meat" into this 30-minute coaching call. I will be re-listening and re-reading the Home Study course numerous times for this topic. Thank you, Diane!

I am absolutely floored by Diane Kennedy's breadth of experience when it comes to the entirely too complicated US tax code! She has reduced my businesses tax bill by MILES and has actually, somehow, gotten us a refund! For the record, our international business turns over $80 million annually! She is very responsive to all of my queries and is just an absolute pleasure to work with. I really don't know what we would do without her and her team. Thank you Diane and USTaxAid!!!

Please tell Diane she is fantastic. I really enjoyed talking to her and her knowledge is amazing. It is very helpful to have her guidance.

Thank you for your great books and information.

I can take all that I learned and apply it to my business, improve efficiency and create more with less!

Diane, You have made and saved me tons of money over the last 5 years!

I have initially heard Diane's name from the podcast series called "Lifetime Cashflow Through Real Estate Investing" offered by Rod Khleif. To say Diane offered a lot of valuable tips during the podcast is an understatement! She touched upon such important and valuable topics as cost segregation, things to look for in a property inspector, write off when filing income taxes, and etc. I then went ahead and jumped on Diane's website USTaxAid.com. After reviewing just a handful of Diane's articles, I have found myself emerged into reading up and following up further on such important topics for any investor as itemizing deductions, searching for big cash-flowing properties under the new administration and much much more. I'm really excited about finding Diane's site and making a good use of her blog posts and articles. I hope other real estate investors will benefit from it as well!
Thank you Diane!

Diane, You're such a wealth of knowledge.

Thank you for writing from the heart. You challenged me today, supported my dream and helped me move forward.

Thank you for sending so much time and energy to help us little guys.

By closing this box by clicking "Accept" to read the content, you agree that you have been notified of the changes. Accept Read More
Policies

This website uses cookies to improve your experience while you navigate through the website. Out of these, the cookies that are categorized as necessary are stored on your browser as they are essential for the working of basic functionalities of the website. We also use third-party cookies that help us analyze and understand how you use this website. These cookies will be stored in your browser only with your consent. You also have the option to opt-out of these cookies. But opting out of some of these cookies may affect your browsing experience.
Necessary Always Enabled

Any cookies that may not be particularly necessary for the website to function and is used specifically to collect user personal data via analytics, ads, other embedded contents are termed as non-necessary cookies. It is mandatory to procure user consent prior to running these cookies on your website.